The last 5 years has seen active fund managers all over the globe, struggling to beat their basic benchmarks. In most instances, the benchmark can be held at a fraction of the cost, in the form of an ETF (Exchange Traded Fund) or Passive (Index) Fund. This has spawned a new wave of criticism from active managers towards the use of ETF’s or Passive Funds.

An Exchange Traded Fund (ETF) is a type of investment that owns underlying securities, such as shares, in the same proportion to that of the index. The best example of this in South Africa is the Top 40 Index. There are several ETF’s in SA, whose underlying holdings mimic the order & quantity of the Top 40 on the JSE.

Harbour Wealth makes extensive use of these investment vehicles within our investment process. I thought it would be worth unpacking the key criticisms leveled at ETF’s or Passives over the years, followed by the evidence, all of which is to the contrary.

It is important to note that this is not the first wave of attack from active managers, most notable of which was the then “legendary” hedge fund manager Seth Klarman who wrote in his book: “I believe that indexing will turn out to be just another Wall Street fad”. The book was published in 1991. Almost 27 years on and this market has only grown exponentially over the same period of time.

The gent who was the inspiration for the movie “The Big Short” has been the most vociferous of the celebrity fund managers of late, in his criticism of ETF’s. The arguments can be summarized as follows.

There has been a prevailing criticism of late, that ETF’s dominate the market by size, spurring concerns that these vehicles would create undue volatility in times of “fear” in global markets.

ETF’s have certainly increased their share in global retail markets; however, one must consider this in the context of the entire market. The US market, where such vehicles have been available for several decades now, debunks such a claim immediately when the entire market is considered:

Whilst ETF market share may be higher in the retail space, its collective market share does not support this in the slightest.

Sell-off’s in any market are as a result of the collective concern of the market. If there is collective fear or pessimism in the market, few investments are immune to these animal spirits. 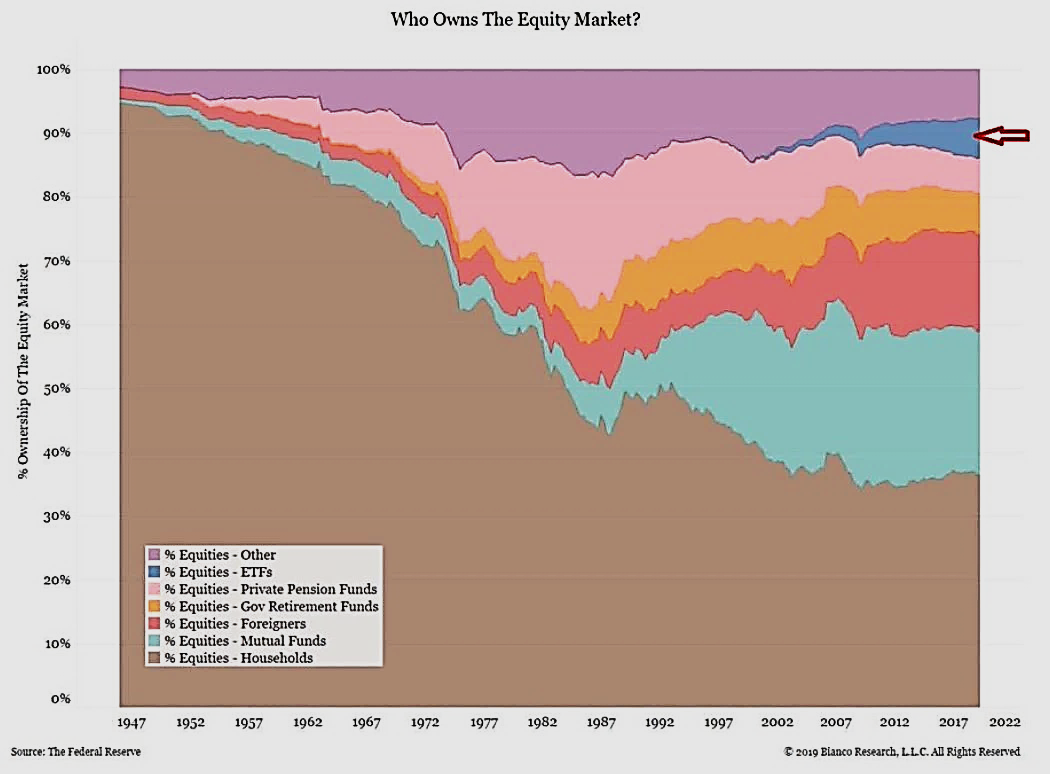 Critics globally, suggest that with so much money flowing into passive funds that price discovery is becoming far more difficult. This term refers to one of the key selling points of active management, which is finding assets that are worth more than the market currently “prices” them at, unlocking better returns over time.

With ETF’s in 2019 accounting for less than 5% of global trade, if anything, the opportunity for price discovery for active managers has improved since 1991. Despite this, over the last 15 years in every US Equity sector, 92%-98% of active managers have not beaten the index over the period.

In a recent research paper (September 2019) by one of SA’s leading money managers, they looked back at the last 20 years of results in the SA Equity sector to understand which managers, if any, were able to beat the index.

A summary of their major findings is as follows:

The third and final long-standing criticism of passives is that they will have a liquidity problem, if investors rush to recoup their funds when markets plummet.

Although the event that sparks a market sell-off has differed over the year’s (Tech Bubble 2001, Debt Crisis 2008), the resultant panic and mass selling of assets, is innately human. It matters not the asset being held, but instead the mindset of the holder. An ETF owns its underlying basket of assets, just as the active manager’s portfolio or fund does. In a market gripped by fear, any asset can be found wanting, regardless of the way it is held.

Ben Carlson from Ritholtz Wealth Management in the US, further reminds us that we have experienced many market crashes, long before the introduction of ETF’s: Tulip Bubble (1637), South See Bubble (1711), Great Depression (1929) and Black Monday (1987).

In conclusion, criticism towards ETF’s and Passive Investing is nothing new, despite the hoard of evidence to the contrary. Simply, the benefits are as follows:

I wonder what words of wisdom Mr. Klarman would have for us 28 years on, about the passing fad of indexation? I think he may just have to eat his hat.

If you would like guidance on how to invest in an actively managed, low-cost (passive) investment solution managed by Harbour Advisory, please feel free to get in touch with one of our qualified independent Financial Advisors